HISTORY OF THE PARK AND MUSEUM

In 1956 the Ontario Provincial Government established this site as the Adolphustown Loyalist Park, which had camping, beach, and picnic facilities, as well as the historic site marking the landing spot of the Loyalists and the original Loyalist Cemetery and 1884 Monument. Allison House, constructed in 1876 by D.W. Allison, former MP for the area, became part of the park, and the upper level was converted into a residence for the campground manager. The Bay of Quinte Branch opened the lower level in 1960 to hold a meeting and to prepare for a Loyalist Museum. Displays varied from year to year at the beginning as most of the items were displayed on loan from local members and collectors. Slowly over the years the museum expanded its holdings and started to collect research materials as well as artefacts related to Loyalist History.

The St. Lawrence Parks Commission continued to run the park on behalf of the province, and the Bay of Quinte Branch UEL operated the museum for many years. Around 1990 with provincial cutbacks, the site was under threat of the government closing the provincial park, and forcing potential closure of our museum. On April 9, 1992 the museum in Adolphustown and the park was re-organized as the Loyalist Cultural Centre, under the efforts of Norman Bell and several other local UEL members. With co-operation in partnership from the St. Lawrence Parks Commission, who owned the park, this group took over management of the entire park and for the first time in several years turned a profit for park operations. In the spring of 2002 the entire site was renamed the United Empire Loyalist Heritage Centre and Park, and the following year, full ownership of the property was transferred from the Province to the Bay of Quinte Branch UEL. The entire property is also protected as a heritage site under an easement by the Ontario Heritage Trust. 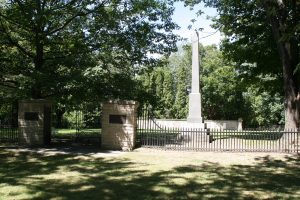 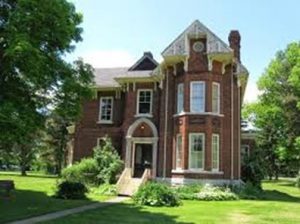 In the last few years we have restored the interior of Allison House to its original intention, including replacement of original interior doors and shutters and matching original paint. The focus on the Museum and Research Centre is to tell the story of the Loyalists from their lives in America, escape to Canada, and early settlement particularly in the Quinte area, as well as the times of the first generation here. In addition, we also cover the 100th anniversary of the Loyalists in 1884, which was huge Provincial celebration on this site topped off by the dedication of the oldest monument to the Loyalists in all of Canada. Many items related to that time are also on display. Prominent Canadians with Loyalist links to our area are also featured. Our library and research centre boasts a huge collection of reference material about the Loyalists. On the grounds, you will find the original Loyalist Cemetery, established in 1784, the UEL Monument from 1884, an Ontario Historic Site marker to mark the landing spot, and a historic recreation of an original bateau that the Loyalists used to arrive here.