The Museum and Archives are located on the grounds of the UEL Heritage Centre and Park, in Allison House, a Victorian mansion constructed in the 1870s by David Wright Allison.  It is one of the few museums in all of Canada dedicated to the United Empire Loyalists who settled in Canada after the American Revolution.

The museum operates seasonally from Victoria Day until Labour Day, and is open daily from 9AM to 4PM all week days except for Tuesdays.  It also operates on weekends during September through to Thanksgiving Weekend.  Please contact the museum for group visits or for visits by appointment at other times.

The museum collection is set up in several rooms and tells the story of the United Empire Loyalists from their times before the start of the American  Revolution, their struggles as they settled in various parts of Canada, and the life of the loyalists in the early part of the 19th Century.  It includes display panels explaining their history, as well as uniforms, military items, early farm artifacts, a country store, carpentry tools, early loyalist living room,  and paintings depicting the Loyalists.  The UELHCP grounds hosted the 100th Anniversary of the arrival of the Loyalists in Canada in 1884, and the Centennial Bedroom  and Parlour shows how far a Loyalist family had come in 100 years. Click on the three Collections Icons on the side to see some of our collections or exhibits.

Our museum also has a library and research room.  See Library and Research Centre on the pull down menu for more details.

For 2022, we have a new display called the “Faces of Loyalty” which shows portraits of some of the Loyalists and leaders that helped build what was to become the Province of Ontario.  There are few original images of these important founders of our province but some of them will be familiar to you.  This image below is of Sir Guy Carleton, Governor of Quebec during the Revolution and later Lord Dorchester, who created the term “UE” as a title to honour the Loyalists and their descendants who came to Canada. 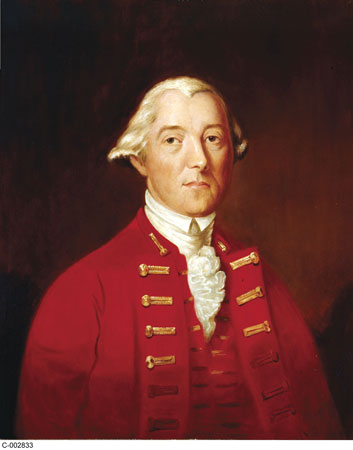 The museum also has a gift shop with loyalist related souvenirs for young and old, as well as new and slightly used books and other research material.  We also have light refreshments for sale there.