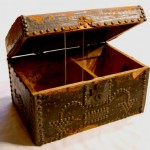 George Walden Meyer’s camp chest c.1800
This leather covered chest most likely belonged to George Walden Meyers. Such decorated boxes were used to carry dishes and cutlery and are often known as mess chests or camp chests. The interior of the boxes were decorated with block printed paper. The exte rior was patent leather embossed with diamond patterns that is still visible on the front of the lid. 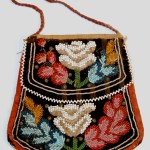 Iroquois whimsy purse. c.1870
This purse is a typical example of the type made by Iroquois craftsmen for the purpose of sale to tourists.  While the number of purses made between the period of 1840 to 1900 is likely over 10,000, no two have ever been found to be identical.  These purses were part of a larger genre of beaded objects, referred to as “whimsies”, and ranged in shapes from boots and stars, to birds. 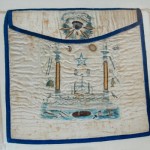 Jacob Huffman’s Masonic Apron, c.1770
The Masonic Apron has as its ancestor the leather apron worn by stone masons for bodily protection while working. The Freemasons adopted the apron as a primary piece of ritual dress. Previous to 1784 the size, style and position of the Apron was largely at the discretion of the Mason. There were no strict rules governing the aprons so long as they did not use colours or symbols that indicated a higher rank than held. The dark blue edging was introduced around 1745 and has remained the Mason Blue ever since. The apron was then standardized in 1815 with much of the pictorial decoration being removed. 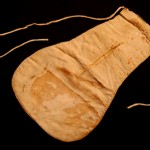 Lady’s pocket c. 1800
This lady’s pocket came to Upper Canada either through the Dorland or the Meyers families. It would have been tied around a woman’s waist over her petticoat and beneath her dress. Slits in the dress either from behind or at the sides allowed access. By 1800 the hanging pocket was decidedly out of fashion and by 1815 it was an object of derision by cosmopolitan ladies.