Painted French fan, c.1690
This painted fan dates to c.1690 and appears to be French in origin. Fans had two sides and only one side had a narrative, the other was often painted with simple flower designs and was held towards the face. The image was for the public and the scene was often deliberately. Our fan’s scene depicts Diana and her hunters surprised while bathing by the soldier, Actaeon. The soldier is out hunting deer and has innocently come upon Diana and her huntresses bathing and in punishment she gives him a stag’s body and heart, stricken with the fear of his prey he fleas and is spotted by his own hounds who chase him down and devour him. It was purported that this fan was presented by Queen Charlotte, wife of King George III, to a family that settled in the Napanee area. 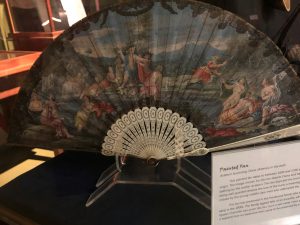 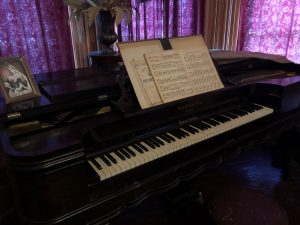 Bayonet, c.1775
The bayonet was introduced into the French army in the 17th century and was common in most European armies by the 1660s. The early muskets fired at a slow rate (about a round per minute when loading with loose powder and ball), and were inaccurate and unreliable. Bayonets provided a useful weapon when a charging enemy could cross the musket’s killing ground (approximately 100 yards) with only one or two volleys from their waiting opponents.  After 1703, the bayonet became, together with the musket, the typical weapon of infantry.  Many socket bayonets were triangular in cross-section in order to provide flexing strength in the blade without much increase in weight. Flexing strength was needed in case a bayonet struck a hard object; such as may have happened to this specimen. This design of bayonet did not have a hilt for using the bayonet apart from the gun, although a socket bayonet was considered a sidearm anyway, especially in the British army of 1775 and was carried in a scabbard very similar to a sword scabbard.