Our military room contains artifacts from the time of the American Revolution.  Various uniforms from the Loyalist Regiments are on display.  In addition there are muskets, bayonets, powder horns, and camp equipment that would have been used by these military units.  Much of the material was brought with them when they settled in Upper Canada.  In addition there are items related to the Hessian Soldiers who served in the war.  Some of the Hessian men settled along with the Loyalists in nearby Marysburgh Township. 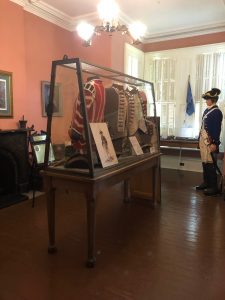 A selection of objects from our collection have been chosen to illustrate the lives of the Loyalists that fled the troubles in the rebel colonies and came to settle Upper Canada.
The First Generation Room showcases valuable personal effects used by Loyalists or their children, that were protected from confiscation and which miraculously survived the voyage together with the crude items made with limited resources in their new wilderness home along the shores of Lake Ontario.  Many of the tools were used to clear their land and build their first homes. Included in the display is a representation of the first store west of Kingston with the original account books of the owner, Benjamin Seymour. 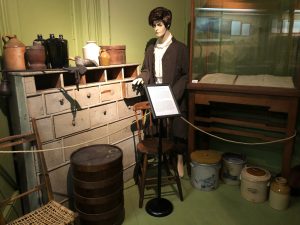 In the front upper room, we have a representation of a typical log cabin living room from the time of the first settlers, which shows various aspects of the chores that were carried on in a daily basis by the woman of the home, assisted by her children.  The main room in a simple log cabin would be used for various tasks, such as spinning and weaving, butter churning, food preparation, etc. 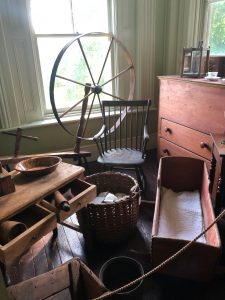