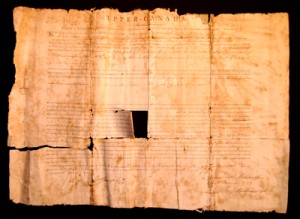 In the summer of 2008 a woman visiting the museum approached the curator and said she had a deed in her family that we may be interested in. She said it was an original land grant from the 18th century, but could tell me little more. I suggested that we would most certainly be interested. She said she would call the curator and walked off. The museum waited a year for that call.
We have numerous documents dating to the 18th century here at the museum. We have indentures and letters of support for petitioners and receipts for sale of American lands during the Troubles, but we did not have a deed granting free crown land to a loyalist settler of Adolphustown. There are quite a few around; we just have never been offered one.
Finally, a year later, that call reached the museum, in the form of a handwritten phone message. Someone had called with a deed to donate; they left a name and a number. The family name was Box. Unfortunately, the Box family are not Loyalists but the curator called them anyway and set up a time to see it.
The curator visited the Box family. The deed was tightly curled, badly frayed, but otherwise intact with no missing sections, thanks to the fact that someone many generations ago had thought to attach the fragile paper to a reused piece of old cotton sheeting.
On the outside of the document the name Christopher Paterson was legible. “So, this is not your family’s?”  The Curator’s hopes rose; the Paterson/Peterson landed at and settled in Adolphustown.
“No, the Box’s bought the land off this fellow,” Mr. Box said prodding the package.
He showed the curator where the old Box farm was on the 1878 map that he had brought with him. There was an E. Box on the map – but not where he thought it should have been. We pried the document open a little more and found mention of the eighth concession. There was no 8th concession in Adolphustown. Something was wrong, either this was a later document or this was not even in our region.
After some paperwork, the deed changed ownership and it was brought back to the museum for a closer look. The first step would be to uncurl the document without destroying it. Over a period of days the curator laid small sections of the document out under glass, unfolding corners and aligning tears. During a particularly slow Saturday, the curator managed to get the entire deed under a single sheet of glass.
…lot number five in the second concession additional…1794…town of Fredericksburg
And there on the 1878 map, E. Box. They had simply opened the deed to the wrong spot, the mention of 8th concession was an additional grant of land in nearby Camden township.
Christopher Peterson [Paterson on the deed] was born on December 23rd 1764 in Schraalenburgh, New Jersey. His parents, Nicholas and Annatje Demarest were both born in Tappan, New Jersey. Christopher, along with two older brothers and his father, were among the defenders at the Block House of Bergen Woods in the summer of 1781. He married while at the temporary settlement of New York in 1782 and there signed up with Peter Ruttan’s Company Six of the Associated Loyalists and eventually landed in Adolphustown under Peter Van Alstine where he appears on the October 5th, 1784 muster.
Christopher did not survive into old age; he died in 1827 at the age of 63. The records at the UEL Archives in Adolphustown do not, unfortunately, include land transactions for Fredericksburg and we do not know who purchased Lot 5 after Christopher’s death (and finding out would have involved getting in the car and a trip to a neighboring research library, a trip I shall save for later).

By 1861 Frederick Box was living on the property. Born the same year that Christopher died, Frederick came to Canada from England and seems to have done well for himself. By the age of 34 he was living in a one and a half storey stone house with a live-in servant couple. Frederick was not a loyalist but his wife, Elizabeth Eve Allison, was. She also happened to be the younger sister of one, David Wright Allison, the Loyalist descendant and builder of the house in which the UEL Museum is now housed. The property was in the Box family until a generation ago when it passed into the Hare family.

One day an older couple wandered into the UEL Museum. They were not looking to do research; they said they just liked old houses and were poking around. They spoke awhile with the curator, and mentioned they once lived in an old house and had found many interesting things in the walls, including a perfectly preserved pair of ladies boots. The curator inquired where this house was. They mentioned it was up near one of the side roads off County Road 8 by Hay Bay Genetics. I asked him to show me on the map I had in front of me and his put his finger down on Lot 5 Concession 2!

The curator showed them the deed, all the while the husband repeating, “I grew up in that house!” The house that his mother still lives in is a two-storey wood frame that looks to be from the late 19th century and is not the one in which Frederick Box lived in 1861. But Mr. Hare told me about an old stone foundation behind the house where he used to play as a kid. Nothing is known about the house other than it was made of stone. But he remembers that every spring the plow would always turn up little treasures any time it came close to the old foundation. It was later bulldozed and buried, now under a field of feeder corn. “But everything is still in there, we never dug it out” Mr. Hare told the curator.
What are the chances that the stone house whose foundation was a playground for the Hare children began its life as the new home of a young Frederick Box, or maybe even the second home of Christopher Peterson, after the original log structure had begun to sink into the ground? Old Mrs. Hare is not one to have strangers poking around so anyone would not be welcome if they showed up one morning with a shovel, but her son, who seemed as keen as the curator, mentioned that anytime his mother is to be away, he’d give him a call, “We can go back there and poke around.”