This original bronze lantaka cannon was made circa 1750 and was of the type used in Asia by the Honourable East India Company.  Many of these cannons arrived back in England, and in turn were used in the American Colonies as swivel cannons on small gunboats or batteaux in the rivers and lakes.  Loyalist Brigades used them in battle on Lake Champlain and elsewhere.  After the war, they were also used as a defence on the batteaux which brought the Loyalists to Upper Canada, and may have seen action in the War of 1812 as well. 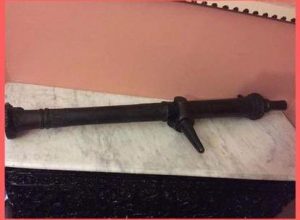 Several generations of the Davy family from Bath were carpenters.  Many of the original homes still standing in the village were built by the Davy men.  All work was done by hand. Logs were shaped and cut to produce the frames for the building.  Various augers were used to bore holes for pegs to hold the boards together.  Interior boards were hand-shaped by planes.  The Davy tool collection display has a variety of these tools used for home construction. 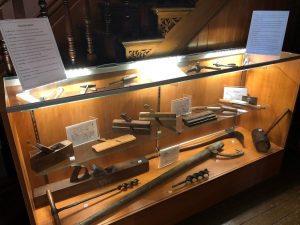 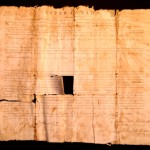 The British crown awarded land to Loyalist settlers in reward for remaining loyalist to the king.  The amount of land received was based on such as your rank, your involvement in key military battles, and your relation to other loyal individuals.  This particular grant was awarded to loyalist Christopher Peterson on December 31st, 1798.  The land was not a full 200 acres, however, this would not have been his first or only grant.  Petitions for land were continually made as land was surveyed and for several decades loyalist settlers, later immigrants, and the children of both made claims for pieces of it. Original land grants also had a large wax seal attached to them, but over the years, many surviving land grants have lost their seal. Our collection also includes a land grant for loyalist Isaac DeMille.