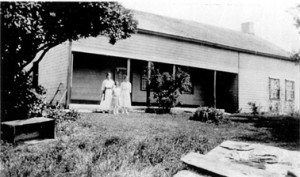 One of the oldest surviving Loyalist homes was saved from the wrecking ball in 2001 by a team of dedicated volunteers and was jointly headed by the Lennox and Addington Historical Society and the UEL Heritage Centre. Sitting on a point of land jutting out into the Bay of Quinte was a decrepit log building with timber-framed sections that stood shoulder to shoulder with large and expensive brick structures not a year old. On Peachy’s map of 1784 Lot 26 concession 3 was owned by one of the Roblin Brothers, however by 1786 the property had been purchased by William Casey. The picture shows the house in the 1920s. The portion of the house to the left is an addition that dates to 1840s. 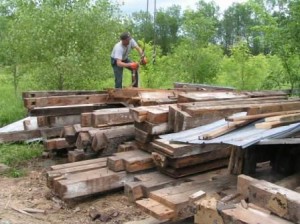 The house was dismantled quickly and loaded onto a truck and taken away. For five years is sat in a field in Prince Edward County awaiting funding to be put back up somewhere it could be protected. The UEL Heritage Centre took full ownership and began to work on a plan for the future. An ambitious plan was drawn up with an estimated cost of $200,000. In a short few months $70,000 was raised and the logs were collected from the PEC field and brought to the museum where they could be stored indoors.
The site of the proposed erection site was cleared in November of 2007 by a team of Archaeologists. We selected a site a short distance away from the historic burial grounds in a small clearing on a hill overlooking the water, not unlike its original location. Currently the UEL Museum is seeking more funding to add to its $70,000. Originally we had hoped to re-erect the building as it would have looked however on inspection too much of the original building had been lost or was a later addition. In the interest of historical accuracy we now plan to erect the building as 100% original. But how do we do that when only 50% of the building survives? Simple, we erect it within its own display case. With that aim in mind we changed our plans and started to design a space in which to erect the building  to protect it from the elements and better show off the original character. 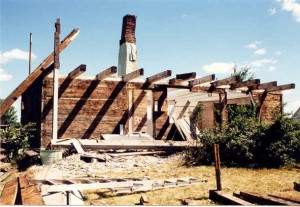 We approached Tom Gunsinger of Bel-Con Engineering in Belleville, a company which designs and builds steel frame structures and together we came up with a large bare space that incorporated as much glass as we could afford and a raised catwalk on which visitors could look in through the upper storey windows and view the roof structure. The new plan actually reduces the overall cost of the project as fewer measures would be needed to protect the house were it sitting out in the weather. It also means we do not have to guess at things like paint colours, shingle styles and grounds keeping. In the summer of 2009 Lake Ontario Park in Kingston announced it would be removing all the structures on its campground to make way for future development. We approached the city with an offer to reuse the 1950s steel frame pavilion, which just so happens to be just the proportions we had in mind.

Check back to see what the outcome of our proposal will be. 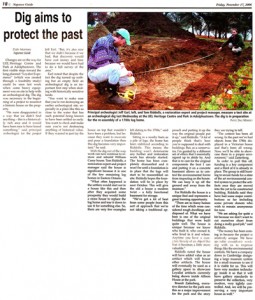