All Prices are in Canadian Dollars, S&H charges are for Canada only,  contact June Dafoe at sales@uel.ca for international charges.

NOTE:  ALSO VISIT OUR GIFTSHOP IN THE MUSEUM FOR ADDITIONAL ITEMS

and UEL Flag to right

The Loyalist or UEL Flag is the British Flag in use at the time of the American Revolution, and does not contain the red diagonal Cross of St. Patrick, which was added to the flag in 1801, creating the current Union Jack. Two sizes of the UEL flag are available from the Branch:

This book is a transcription of original records held at the United Church of Canada Archives in Toronto, and details the early Quinte area records for the Methodist Episcopal Church for Smith’s Creek Circuit Marriages & Baptisms (1807-1844), Bay of Quinte Circuit Baptisms (1835-1846) and Napanee Circuit Baptisms (1843-1853), as well as the history of the Circuits along with some Genealogy on early Bay of Quinte region families, many of whom were Loyalists.

James McMasters and Family, To Quinte & Beyond by Brian Tackaberry, UE.

Following the American Revolution, thousands of men, women and children abandoned their homes and families in the thirteen colonies and fled to territories still under the British flag. Many of these United Empire Loyalists, including James McMasters, were granted lands in the Bay of Quinte area where they established prosperous farms and raised thriving families. James McMasters originally settled in Adolphustown then moved with his family to Sidney Township.  His descendants soon spread through the Quinte area and beyond. This is the story of some of those families and their 4000 descendants, published by General Store Publishing House in 1996.

This book was originally printed in 1958 and revised with family additions in 1981, and covers literally several thousand descendants of United Empire Loyalist William Ketcheson 1759-1848, who was granted land as a Loyalist on the 5th Concession of Sidney Township, Ontario along with his family. He is one of the few original Loyalists of the area with a known portrait, included in the book.

Softcover, 219 pages, indexed, including some photos and documents.

This booklet describes the story of the battle of the Blockhouse at Bergen Wood, New Jersey, on July 19th, 1780 where a small band of seventy five Major Ward`s Loyalists successfully defended themselves against a large American force under General Anthony Wayne. Included are the names of 15 who have been identified, and have connections to the Bay of Quinte area.

Celebrating Over 225 Years of Loyalists in Canada.
Produced by Bay of Quinte Branch UEL and Wandering Journalist Productions Media, 2009 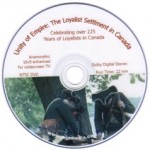 This DVD tells the story of the Loyalist Settlements, primarily in Ontario. It runs 22 minutes and describes the background to the American Revolution, the plight of the Loyalists, and the eventual areas of settlement throughout what would become Ontario, using still images, narration, and live footage from re-enactments.

The second part of the video looks ahead to the 225th Anniversary of the arrival of the Loyalists, with footage taken at the Dominion Conference in June of 2009. There are also bonus interviews with David Smith and Peter Johnson, concerning the Loyalist Brigades and the life of the early Loyalist settlers. This DVD is an excellent promotional video for educational outreach by Loyalists for presentation to either student or adult groups, as well of being of general interest to anyone keen on Canadian History and the Loyalists.

You may order from the address below, please make your
cheque/money order payable to:
Bay of Quinte Branch UEL
Payment may be sent to: Branch Sales, c/o June Dafoe, 4150 Old Hwy #2, R.R. #4, Belleville, ON K8N 4Z4    email: sales@uel.ca