We do many projects related to preserving Loyalist history in the Bay of Quinte area.  Our main on-going project is owning and operating the United Empire Loyalist Heritage Centre and Park in Adolphustown.In addition, we created the “Legacy of Loyal Americans Hall of Honour” in 2003 to identify and celebrate those descendants of the United Empire Loyalists, particularly with roots to the Quinte area who have made significant achievements, either locally, nationally or internationally.

This project was made possible through grant money from the Museums Technology Fund of the Ontario Ministry of Culture and Tourism.  Funds allowed for the purchase of new equipment to carry out the project and for hiring of staff to carry out the project during the 2012 operating season of the UEL Heritage Centre. Some items for digitizing were also provided by the Bay of Quinte Branch UEL. The aim of the project was to provide digital copies of items in the collection of the museum, which would allow greater access of these items to the general public and those doing Loyalist or family tree research, while protecting the integrity of these early fragile documents, some dating back to the 1700s.  This will be available to any visitors to the research library of the UEL Heritage Centre starting in 2013.  In addition, it has provided the museum with digital records of the items in its collection, complying with standard museum practices.

As part of our mandate, we help to promote the history of the period of Loyalist Settlement, especially in the Bay of Quinte area. During 2010 and 2011, the Bay of Quinte Branch executive distributed copies of books written by author Connie Brummel Crook to 75 elementary schools and 32 libraries in the Quinte area. The novels donated were historical fiction based on actual events and families from the region, and tie in nicely to the Grade 7 Ontario history curriculum. The novels were “The Hungry Year”, “The Perilous Year”, “Meyers Creek” and “Meyers Rebellion“. We appreciate the support from Connie with this project. For more information about her publications please visit her website at www.conniebrummelcrook.ca
This project complemented our earlier donation of the teacher’s resource publication “Loyalist Day in Ontario” to our local elementary schools in 2003.

The Bay of Quinte Branch launched its DVD in November 2010 which tells the history of the United Empire Loyalists in Canada, with special reference to the settlement of Eastern Ontario. Much of the footage was shot during the 2009 Dominion Conference. The DVD is an excellent resource for those interested about the history of the Loyalists or early Canadian History and runs approximately 25 minutes. For more information or to order copies, see our branch store.

THE LOYALIST SETTLEMENT EXPERIENCE:
CELEBRATING THE 225th ANNIVERSARY OF THE LOYALISTS IN ONTARIO IN 2009

We hosted the 2009 Dominion UEL Association of Canada Conference, in Napanee and Adolphustown, Ontario from June 11th through 14th as part of the 225th Anniversary of the Landing of the United Empire Loyalists in Ontario.

A full encampment of re-enactors was on the grounds of the UEL Heritage Centre and Park. On Thursday they hosted several bus-loads of local elementary school students who were there to see how our Loyalist ancestors lived, including a military surgeon from the times. On Friday we offered two bus tours that visited different historic sites connected with the Loyalists located along the Loyalist Parkway, Highway 33. The day concluded with a buffet dinner in Napanee, with the theme of the 1884 Loyalist Centennial Celebrations in Ontario. The highlight of the evening was a presentation by Sir John A. Macdonald, performed by re-enactor Brian Porter, showing us some colorful insight into Canada’s first Prime Minister, and his connections to the Bay of Quinte area.

On Saturday the public was invited to take part in the Loyalist Settlement Experience 225 encampment held on the grounds. During the day there were over twenty tables set up by various genealogical and historical society groups and vendors, as well as reading by authors and a screening of a video on John Walden Meyers. The highlight of the activities was the large encampment of military and civilian re-enactors showing how our Loyalist Ancestors lived once they arrived on this site. There were several military tactical displays throughout the day. A solemn ceremony was held at the UEL Cemetery as wreaths were laid at the 1884 UEL Monument by Dominion President Fred Hayward and Bay of Quinte President Brian Tackaberry, followed by each UEL branch of the Dominion laying a posey bouquet at the Monument, and musket volleys.

A Sunday UEL church service was held in historic Old Hay Bay Church, the oldest Methodist Church in Canada, erected in 1792 which is designated as a National Historic Site, and the site of worship for many Loyalist ancestors. Many members were dressed in Loyalist attire, and gathered for a group photograph at the end of the service. Several members also attended a service in the early afternoon at nearby St. Alban’s Church, erected in 1884 to commemorate the Loyalist Landing.

This 4-day event was two years in the planning and was our largest re-enactment held on our grounds since the Bicentennial in 1984.

We have also held several other smaller historical re-enactments to celebrate the Loyalist Landing in Adolphustown and our Loyalist Heritage over the previous decade.

The Bay of Quinte Branch celebrated its 50th Anniversary during 2006. The celebrations kicked off with the Annual Meeting, with recognition of our long time members and especially our Charter Year Members from 1956 who were presented with certificates. They were asked to cut our anniversary cake, as shown in the photo.

The second part of the celebration was held on June 17th in Adolphustown, with a Landing Re-enactment, displays, guest speakers including Rob Leverty from the Ontario Historical Society, and presentation of awards to living past branch presidents.

The celebrations concluded with a 50th Anniversary Banquet held on September 9th at the Holiday Inn, Trenton, which included special talks, Hall of Honour presentations and Silent Auction.

RESTORATION OF THE BELLEVILLE UEL MONUMENT, 2005

The original Loyalist Monument unveiled in Belleville in 1924 was restored and moved to a new location next to the main downtown bridge by the City of Belleville in 2005. This monument is the second oldest monument to the Loyalists in the Province of Ontario. We worked with them over several years in the planning for the restoration and help with the four new plaques erected next to this monument. Two of our Hall of Honour Inductees, Alan Dempsey, and Gwen Lazier Braidwood, are commemorated on one plaque for their efforts in 1924. The new site for the monument was part of the Parrot Riverfront Trail and was a joint effort supported by the municipality along with many local groups including our branch. The unveiling of the restored monument took place on September 10, 2005 including many local dignitaries. The Bay of Quinte Branch, with financial support from Dominion UEL also installed a flagpole at the site, so the Loyalist Flag can fly at all times next to this important monument. 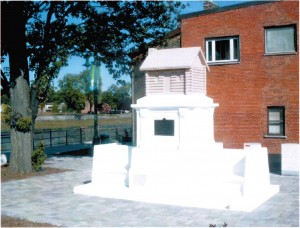