Restoration efforts in the spring of 2008 exposed a dull grey wall behind a 1950s kitchen. Upon examination, the drab colour proved to be original and bore the characteristic darkening towards the ceiling of years of gas lighting.

On account of this wall the room was selected to house our furnishings that are period to the house, c. 1870-80. It is designed to reflect the lifestyle of a Middle Class family during the Centennial Year of the Landing of the Loyalists in 1884, when thousands of visitors came to Adolphustown for the celebratory events.  The Centennial Bedroom shows that within 100 years, some Loyalists had gone from simple cabin residences to luxury homes such as the Allison House.  The bedroom is set up to show what life would be like for the family as they looked out on the 1884 Anniversary Events to honour the arrival of the Loyalists in Ontario, held on their grounds near the UEL Cemetery. 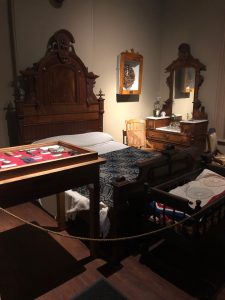 The house was built with every luxury available in the 1870s such as built in closets, a boiler system, gas lighting and most notably a washroom. As a result there is evidence that very few upgrades were done while the Allison’s lived in the house.  The parlour room on the main level was used to entertain guests to the home.  It is set up to show what it would have looked like at the time of the 1884 Centennial Events.  Some of the original family photos are also on display in this room. 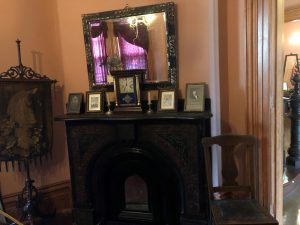 The photograph below shows an aging  D.W. Allison with his family sitting before their Queen Anne mansion; however, the fountain behind them has long since fallen into disrepair and is now filled with weeds. 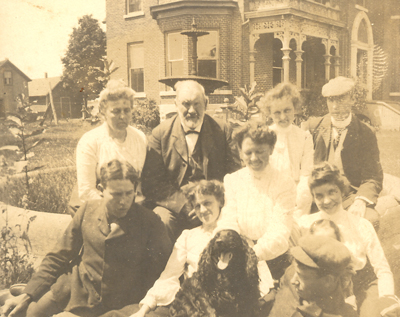